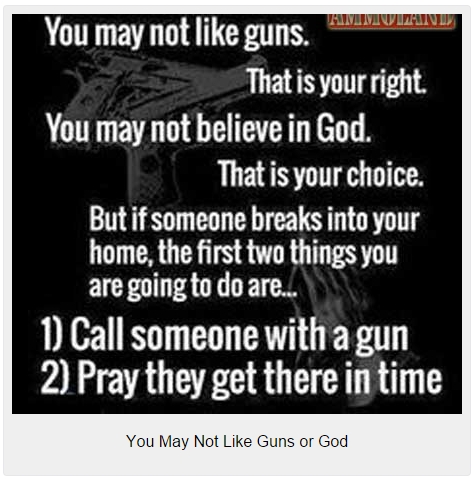 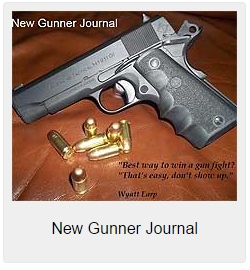 Anti-Gun Liberals can be an incredibly unreasonable and downright silly group of people.

The constant nattering of mindless drivel that falls from their foaming mouths – couched as a reasonable argument or common sense – is, most times, mind-numbingly emotional, churlish and petulant.

After the recent shooting at a South Carolina church that killed nine while purposely leaving one survivor as a witness, Drxxx had this to say…

If you force surrender of all weapons before entering [the church], then you’ve essentially disarmed any would be killers.

So, Drxxx, as people come into the church and you pat each of them down, the nutcase with a gun will just meekly stand in line? And when you arrive at the would-be psychopath killer, your telling me you believe he is just going to slump his shoulders and hand over his gun in defeat? Just like that?

They where shot thru the glass on the front of the building, with an AK47. Built to kill weapon.. Please explain to the world, how a 9mm, would have fared [if the Marines had returned fire through the glass with standard issue sidearms]. Especially since they did not even see it coming.. How many shots can AK47, fire in 10 seconds??? [the same amount as any run-of-the-mill semi auto handgun] Bullet proof glass is a much better answer..

Outside a maniac with a diseased mind makes his way across the parking lot, his brain foggy with its own mindless yammering, his pulse pounding in anticipation of this personal Great Thing he intends to do.

He walks up to the doors and without warning, open fires – Bam! Bam! Bam! Bam! – and in a heartbeat he realizes he’s trying to shoot through bullet proof glass! So, instead of reaching out, opening the doors, walking in and continuing his onslaught, you believe he would hang his head, turn slowly and walk away in defeat.

After the Aurora theater shooting Tom had this thought…

Anyone saying “if only someone was packing and had shot the guy” needs to realize that it’d be next to impossible for even a trained person to do that in a dark theater with a loud movie running, one that’s full of tear gas and panicking people, with an assailant who’s dressed in black and wearing body armor. Odds are they’d have easily hit some more bystanders instead, increasing the already horrific body count.

So, Tom, you and the Wife stroll on down to the local theater to catch the latest action flick. The movie is intense, interesting and is pleasantly holding your attention. About halfway through the movie, some loud shots go off, startling you – is it part of the movie? Then smoke, more loud bangs, people screaming.. what the hell? Others are running for the exits and before you completely comprehend the situation, the theater is in utter chaos.

About four rows in front of you stands a man in black, shooting slowly, with lethal intent, the surrounding tumult a stark contrast to his matter-of-fact, slow and steady approach to mass murder. You see people trying to escape, running, falling, some shot, some scrambling for safety, frantically climbing over others, bounding over rows of seats or crawling low across the concrete and carpet floor.

Your mind is screaming at you to run! Instinctively you grab your wife and throw her to the floor, between the rows of seats, trying to protect her. Adrenalin dumps into your body, your auditory senses close down, your eyes focus down to a pinpoint – tunnel vision – and you are unaware you are screaming at the top of your lungs to “go Go GO!”

You both frantically crawl along the floor as gunshots explode and echo through the cavernous, darkened theater, mingling with screams of the frightened, flashes of gunpowder and the moans of the wounded.

You furtively glance up to the pandemonium that surrounds you. With shock and disbelief you see the gunman turning his focus on you and your wife, his gun now extended towards you, his next target. You raise your hand to the gunman in a desperate and feeble last gasp at defending your wife and yourself, all the while thinking… This can’t be happening! 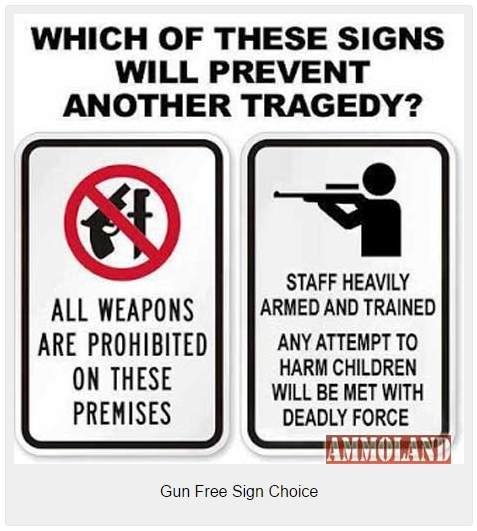 Suddenly, just to the right, two rows down, you see a man crouched behind the row of seats at the end of the aisle.

He has a gun! He is ready to fire on the sociopath who is committing the mayhem, who is creating the havoc and fear, who has brought the devil with him to the movies. You cannot believe there is someone else carrying a gun! And just as the good guy with a gun draws a bead in an attempt to stop the maniac with a demons voice wailing in his head, possibly saving your life, you scream – “Put the freaking gun away! You might hurt someone with that thing!”

Near my town, we’ve had two break-ins in a couple of weeks. 10:00 PM at night, a group of 4-5 men bursting in the door and quickly controlling those inside. Carreraxxxx had this response to a U.S. Marine who stated he thought he was capable of defending his family with a gun in the home.

@kcrxxx — I’m happy for you, and your false sense of security with your arsenal that can be used against you and your family.

Carreraxxxx, you’re sitting at home on a soft summer evening, the kids on the floor watching a Disney movie, your Wife settled into her favorite chair, reading a book. You can’t believe how wonderful your life together has been. A good job, beautiful family, a great house in a wonderful neighborhood. All is good…

Suddenly, their is an insane banging on the front door. The kids scream in reaction to the ear splitting noise. The Wife jumps up, frantic, looking at you for guidance, not understanding whats going on as she gathers the children to her.

And now you realize, much to your chagrin, the front door has been violently breached and footsteps pound down the hall towards you.

Your home has been breached by thugs looking for valuables and who may or may not have violence on their minds.

Sitting on the table next to you is a book. On the floor is your bowling ball. On the footstool, without explanation, a gun appears. Which one do you reach for to protect your family?

On guns in the hands of trained individuals in schools, Bridgett xxxx had this to say about children paying a price for maniacs in schools.

They [children] pay the price several times a week. It’s a pity that their parents care more for their killing machines than they do their own children.

There is a sharp staccato report of, what? Firecrackers? No. Gunfire!? Oh my God! And it’s close! An alarm goes off that signals an intruder is in the school and it is an active shooter situation. 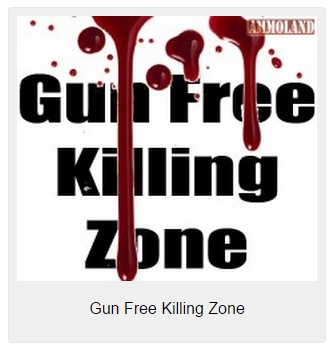 Your training kicks in and as you rush to close the door a man appears before you. Disheveled, dirty, a crazy look in his eyes and with him he has a handgun and a rifle. Before you can react to the situation, he shoots you in the shoulder, your collar bone exploding, a mist of blood surrounds your head and you fall back to the floor, feeling as though someone has just hit you full force with a baseball bat!

You groan as he steps over you, not even looking at you as he enters the room. The children are screaming, terrified, their little eyes wide as you hears shouts of “Mommy! Help, Mommy!” Sobs and squeals cut through the air as you try to regain your feet, now realizing that you are wounded but not out of the fight.

The horror before you is relentlessly unfolding, unless you can do something, anything! The demon in your room has turned his cold, dark eyes on the huddled mass of squirming, crying, terrified children. You are staggering to your feet when you see the Teacher, Gail, a friend of yours, reach behind her back and come out with a Glock 19 with 15 + 1 rounds of 9 mm for the bad guy.

Your fear is at its height, screaming at you and you shout… “Goddamn it Gail! No! You might hurt someone!”

Bad guys will always have guns and they will do harm and that will never change. No gun laws can prevent it. Wishful thinking can’t make them go away. Fairy Dust is of no help.

Murder is already against the law, so why would more “feel good” gun laws stop the madness?

I’m all for a conversation about curbing violence. I don’t know a single person who isn’t – Liberal, Conservative or Libertarian. But the anti-gunners insistence that it’s all the fault of the gun is surreal, stupid and Hoplophobic.

Don’t be a victim. Don’t let your Children be victims. Guns are not the enemy, violence and the people who commit it, are.

My new book “I’m Married… Shoot Me!” The harrowing tales of your average Husband. Children, insanity and manly cowardice, all wrapped up in love – is now available through Lulu.com

Next Is This REALLY A Good Idea? Oath Keepers Organize An Open Carry Demonstration For Blacks In Ferguson