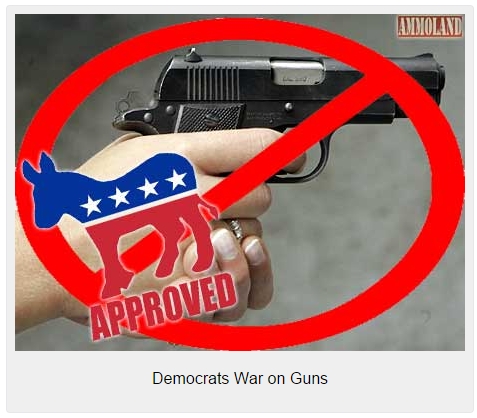 On August 20th, 2015, Gun Owners of America executive director Larry Pratt described the Democratic Party on the federal level as “increasingly” tyrannical and focused on passing laws to take guns away from law-abiding Americans.

Pratt said, “The Democrat Party has increasingly become a party of tyranny. And you can’t be a good tyrant if there are a whole bunch of schlubs running around with guns.”

But this push has been consuming the Democratic Party for longer than the last three years. For example, on September 13, 2014, the New York Times admitted that Democrats literally made up the term “assault weapons” in order to create an entire class of guns that they could then try to ban.


Moreover, the Times pointed out that “assault weapons” are not even the guns criminals predominantly use. Rather, they are the guns Democrats loathe.

It was on March 4 2015 of this year that Rep. Mike Thompson stood with Gabby Giffords to renew the push for expanded background checks. And just two days after that, Obama told Benedict College that “there are neighborhoods where it is easier for you to buy a handgun… than it is for you to buy a fresh vegetable.”And in July, Senators Murphy and Blumenthal urged Obama to go around Congress and change background checks via executive powers.

And we can’t leave out April 2014, when 44 Democrat Senators voted to subjugate the Second Amendment to the UN’s Arms Trade Treaty.

This is the Democratic Party of the 21st century, pushing gun control for law-abiding citizens under the guise of stopping criminals from acting out their criminality.

Next [INFO-GRAPHIC] The Largest Standing Army in the World, Is Not Who You Expect