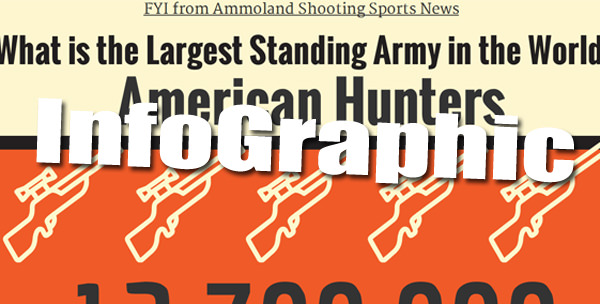 Fall hunting season is almost here and a fun annual topic of discussion around the campfires is always how large the U.S. population of hunters is?

And how does the number of U.S. hunters stack up against the largest standing armies in the world?

Much to the chagrin of anti-hunting forces across the USA, hunting numbers have remained steady over the last decade, even growing as more and more women get behind the gun and out in the field.

Check out our newest info-graphic on how American hunting forces stack up in size against the largest standing armies in the world.


Based on feedback, we have also included USA’s own standing army, and yeah we know there may be overlap between those two points of data, as a lot of our brave military is also active hunters, but this is fun facts, not life and death math.

Like our Largest Standing Army graphic? Your welcome to share it on your own websites, blogs and social media. We know it will get the freedom hating pacifist worked up and hey, isn’t that the point.


Previous Democrats Are Tyrants Who Prefer Their Subjects Unarmed