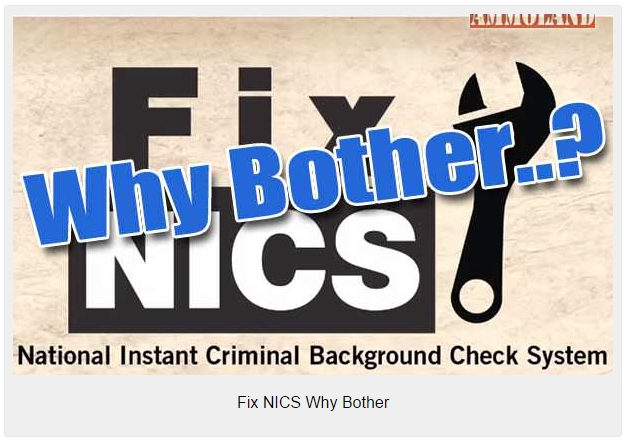 The National Instant Check System, or NICS, the computerized system used to perform background checks on retail gun buyers, has been operational since 1998, as part of the 1993 Brady Handgun Violence Prevention Act.

The concept of an “instant” check was put forward by the National Shooting Sports Foundation, or NSSF, the trade association for the firearms industry, and the NRA as an alternative to the proposed waiting period and slower background check system included in the original Brady Law.

Since its original adoption, there have been constant efforts to expand, enhance, and improve the $2 billion dollar system. Every time there is a high-profile murder, Congress, President Obama, and media outlets raise the call for expanding NICS background checks, adding more categories of people to the prohibited list, and other “improvements” to the system. 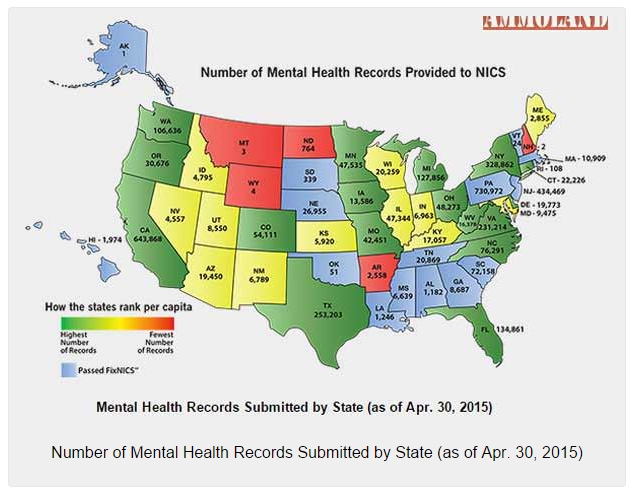 One of the most outspoken proponents of enhancements to the NICS system is the NSSF, representing firearm manufacturers, importers, and retailers ( the real Gun Lobby). For several years they have been pushing a program they call “Fix NICS.” Their plan calls for the federal government to provide financial incentives to encourage states to submit more records – particularly mental health records – to the NICS system in hopes of preventing people with mental problems from easily acquiring guns.


NSSF is spending tens of thousands of dollars promoting their Fix NICS initiative to the public and lobbying Congress and state legislators.

Meanwhile, the Brady Campaign to Prevent Gun Violence has their “Finish the Job” campaign calling for mandatory background checks on all gun buyers, and Mike Bloomberg’s Everytown for Gun Safety is taking the same demand to the states, with lobbying and ballot initiatives. These groups also support more extensive reporting from the states on disqualifying mental health information, but they have directly opposed any legislation which does only that, without addressing their “universal background check” demands.

After the Sandy Hook shooting, when Congress debated expanding NICS to include all private firearm transfers, NSSF’s Fix NICS proposals were offered, and were supported by the NRA and many Republicans, but Democrats rejected those proposals because the wrong people would get credit for them and they didn’t include a “universal background check” provision.


For the NSSF and NRA, lobby for “improving” NICS is primarily a way of showing that they are reasonable and proactively working to solve a problem.

Crazy people don’t have much of a lobby, and who could argue against keeping guns away from mental patients? They also hope to mitigate some of the bad press they get when some clearly demented person commits a heinous crime with a gun. History doesn’t support that hope however. Virtually all of the rampage murderers of the past 30 years passed background checks and would not likely have been stopped by any of the proposed “improvements.” The reality is that people who suffer from diagnosed mental illnesses are no more likely to engage in criminal violence than anyone else. None of the murderers were recognized as a serious threat to society by their doctors or families – at least not serious enough for them to make efforts to remove the individuals from society into a safer, controlled environment.

The murderer in Santa Barbara a couple of years ago came the closest to being identified and stopped by concerned family members, but he was still able to twice pass California’s strict, “universal” background check, and half of his victims were killed with a knife, not guns.

While the gun groups’ efforts to “improve NICS” appear to be motivated by PR concerns, the Brady’s and Bloomies efforts are all geared toward making acquiring a firearm more expensive and complicated for everyone, because they just don’t like guns and think that every gun that they can prevent from being sold equates to a life potentially saved.

The truth is, background checks are already a huge waste of money, and expanding or enhancing them is just a way to waste even more money. The case can certainly be made that the checks make it a little harder for criminals and violent mental cases to get guns, but how much harder, and at what cost?

Expanding the collection of disqualifying information just puts more names on a list. That list currently contains some 12 million names, and current proposals to “improve” the system could easily increase that number to 18 to 20 million. What is most significant about these numbers is the fact that the vast majority of these “prohibited persons” do not actually pose any sort of threat to society.

According to the FBI, out of nearly 200 million transactions processed by NICS since its inception, fewer than 1% resulted in blocked sales, and estimates suggest that at least 25% of those were erroneous, and only a handful are seen as enough of a threat to even be prosecuted for their illegal attempts to purchase a gun. When you consider the fact that the vast majority of gun buyers already own at least one firearm, yet are investigated every time they make a purchase ( or multiple times in the case on NJ), the huge wastefulness of NICS begins to become evident.

NICS is the worst sort of “Big Brother,” intrusion. It wastes hundreds of millions of dollars primarily toward investigating law-abiding, non-threatening citizens, while being incapable of detecting real threats or preventing those who pose a threat from acquiring the means to carry out their heinous crimes – and this convoluted, expensive, ineffective system is all about limiting an enumerated constitutional right.

Of course no one wants violent criminals or violent lunatics to easily acquire firearms. Infringing on the rights of the majority in hopes of slightly hampering the dangerous minority, is not a reasonable solution.

Doesn’t it make more sense to spend those hundreds of millions of dollars on treatment, rehabilitation, incarceration, and institutionalization of the people who represent the threat, rather than spending it on interfering with the rest of us?

The way to truly Fix NICS is to scrap the system and redirect the funds toward fixing mental health treatment, fixing the justice system, and supporting law enforcement.

Next It Depends on What the Meaning of ‘Crazies’ Is