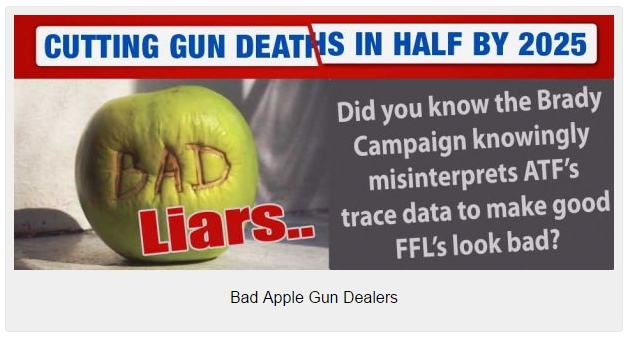 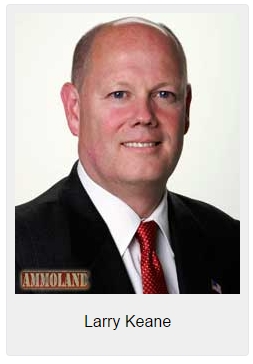 After years of evidence that the vast majority of federally licensed firearms retailers (FFLs) are law-abiding business owners that comply with a complex regulatory system the government has created, the anti-gun crowd is again arguing that there are “bad apple” retailers that must be legislated or sued ( tiny.cc/4l2r2x ) out of existence.

While this is an improvement from arguing our industry is comprised entirely of crooks and liars who want to sell as many guns to as many people as possible – even if criminals or mentally ill –their arguments are still rotten.

Case in point: recently the Brady Campaign blasted out an email from an FFL that claims to be a “gun dealer who follows Brady’s Code of Conduct” and who refuses to sell a firearm to “any individual who hasn’t definitively passed a Brady background check, whether after three business days or sixty business days.” This self-described “responsible gun dealer,” Chris Kitaeff, calls on the Brady email list to join him in calling on the Justice Department and ATF to “do everything in their power to compel ‘bad apple’ gun dealers to adhere to Brady’s Code of Conduct or shut down.”

Forget for a moment that FFLs are hardly in need of a lesson in best practices from those who are opposed to their very existence, and let’s take a look at the standard bearer Brady has chosen to carry this message.

Chris Kitaeff does indeed hold a license to sell firearms. He owns gun-related website domains that are not in use. But there is no evidence he is actually in the business as most people would understand it.  In fact, his FFL is registered to this residence.


This isn’t the first time this FFL-holding hedge fund investment professional has carried ammo for the anti-gun crowd. He has been quoted in the news in the past as an exemplary FFL. The irony is, the Brady Campaign and its predecessor Handgun Control Inc. have made it a priority to rid the country of FFLs who do not have storefronts. Going back decades, this organization has vilified so-called “kitchen table dealers” as an unregulated problem.

So the gun control group that hates FFLs without storefronts has found one to be its poster-child. This is fitting for a campaign that is centered on misconstrued data.   The whole basis of the “bad apple” effort  ( tiny.cc/e33r2x ) is that “90% of guns used in crimes were supplied by just 5% of dealers.”

Where did this stat come from?

The Brady Campaign cites figures in a 15 year old ATF report, “Commerce in Firearms in the United States, February 2000.” The Brady Campaign has for just as long knowingly misinterpreted the ATF’s trace data in this report. In fact, the unsuccessful Brady Campaign-backed municipal lawsuits that sought to drive the industry into bankruptcy in this period were predicated on the misuse and distortion of ATF trade data.

The fact that a small share of licensed retailers account for a large share of gun traces cannot legitimately be interpreted to mean that any of these retailers did anything wrong, such as knowingly selling guns to traffickers or their straw-purchaser associates. First, just because a trace led law enforcement back to a retailer does not indicate whether there was any illegal or improper activity on the part of the retailer. The traced gun may have been legally sold to an eligible buyer, later stolen, perhaps re-sold on the street, used in a crime and recovered by police.

ATF acknowledges this by cautioning in reports that, “ATF emphasizes that the appearance of a Federal firearms licensee (FFL) or a first unlicensed purchaser of record in association with a crime gun [i.e. traced gun] or in association with multiple crime guns [i.e. traced guns] in no way suggests that either the FFL or the first purchaser has committed criminal acts.”

Even if there are many firearms traced back to a single retailer, it’s not safe to assume you’re looking at a “bad apple.” For one thing, the most successful retailers have the highest volume of sales to eligible buyers. This means a larger number of firearms are circulating that could be stolen and later used in a crime. As even  anti-gun researcher Garen J. Wintemute shows, even the most law-abiding and ethical dealer can have high trace counts solely if he sells many guns.

ATF echoes this in a 2003 press release that notes, “It is misleading to suggest that a gun dealer is corrupt because a large percentage of the guns sold in his store are subsequently used in crime. Many other factors – including high volume of sales, the type of inventory carried and whether the gun is located in a high crime area – contribute to the percentages cited by the Brady campaign.”

Another reason why a conscientious law-abiding gun retailer will have higher numbers of crime guns traced back to him is high rates of crime, especially residential burglary, in the area from which the FFL draws his customers.  The higher these rates, the higher the share of the retailer’s legally eligible customers who will have their guns stolen.  Once stolen, many guns will be used to commit crimes or otherwise be recovered by police, and be traced by ATF back to the dealer who originally sold the gun.

One thing the gun control crowd doesn’t mention is that the average “time to crime,” or the time span between when a traced firearm was legally purchased and when it was used in a crime, is about 11 years.

There is absolutely nothing in the Brady Campaign data – or in any other data – to indicate that anything other than high sales volumes and higher local gun theft rates completely account for the higher numbers of crime guns traced back to those FFLs that Brady arbitrarily labeled as “bad apple” dealers.

Is there any truth to the broader claim that misbehaving licensed gun retailers account for a large share of guns getting into criminals’ hands?  The best evidence indicates “no.”

ATF and other law enforcement agencies find very few FFLs violating the law, and those they find were responsible for only a negligible share of the guns getting into criminal hands.  In fiscal year 2014, ATF detected so little misconduct that they revoked the licenses of just 0.71% of retailers.

The National Shooting Sports Foundation is the trade association for the firearms industry. Its mission is to promote, protect and preserve hunting and the shooting sports. Formed in 1961, NSSF has a membership of more than 6,000 manufacturers, distributors, firearms retailers, shooting ranges, sportsmen’s organizations and publishers. For more information, log on to www.NSSF.org.

Previous [VIDEO] Dealing With Dispatchers After A Deadly Force Incident

Next [WATCH] Detroit Concealed Carry Holder Shoots Robber, “I Advise Everyone to Pack”