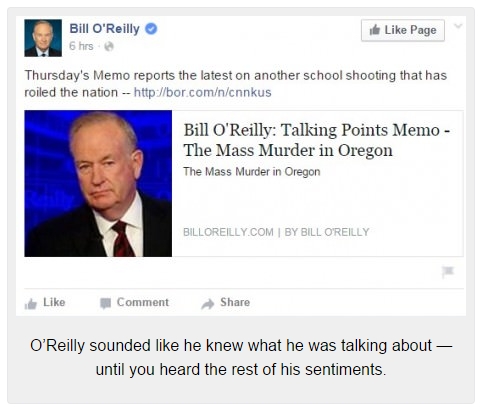 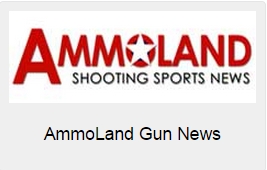 Two memes have emerged from the Oregon bloodbath that can both cause lasting political damage if they are accepted at face value:

The first is that the demonic coward was a “conservative Republican.” (And no, I will not name it, as being known was what was craved—and I also will cease referring to such self-dehumanized monsters as anything but “its.”) The second assumption making the rounds in some pro-gun circles is that Bill O’Reilly gave a rousing defense of the Second Amendment Thursday night on his show.

But wait, you might challenge—the killer self-identified as a “conservative Republican” in its online profile. All the “Authorized Journalists” are spreading that “news” far and wide. Doesn’t that end all doubts and debate?

Hardly. It registered to vote as an “independent,” and it “idolized the Nazis and the IRA.” While Opposite Day “progressives” have been trying for years to distance themselves and convince people that Hitler wasn’t really a “national socialist,” author George Watson definitively documented “It is now clear beyond all reasonable doubt that Hitler and his associates believed they were socialists, and that others, including democratic socialists, thought so too.” Conversely, the Irish Republican Army, whether we’re talking “Officials” or “Provisionals,” are hardly synonymous with “conservative [US] Republicans.” If the Umpqua monster dementedly thought otherwise, a line from “The Princess Bride” comes to mind.


OK, but what about O’Reilly? His “Talking Points Memo” last night sounded like the type of stirring defense for the right to keep and bear arms we’d expect from the head of a gun rights organization. He brought up the Second Amendment, the right to self defense, and how Obama ignores problems in areas with strict “gun control” like Chicago. He correctly asserted no legislation could prevent massacres like at Umpqua and chastised the president for “politicizing” the issue. So what’s not to like?

It’s what he said in a clip that’s not getting much attention that illustrates the danger in presuming O’Reilly to be 2A-informed and correct. Go to the 5:11 mark, and hear for yourself what he believes and advocates:

This is hardly a small point.  It is, in fact, a showstopper for those who know the score. Perhaps those who live insulated lives within O’Reilly’s elite circle, and who don’t even realize how provincial their “enlightened” perspective is, might agree with him.  But everyone I consider reasonable would say “Hell no” to either proposal, followed by “Your move.”

I won’t even get into why federalizing all “gun crimes” delegates powers never envisioned by the Founders, the dangers such schemes pose to those who will not comply with clear infringements, and why those who say  “Enforce existing gun laws” may as well proclaim “Enforce existing Intolerable Acts.” The registration and AK comment was enough of an indicator for how far O’Reilly still has to go before gun rights advocates can consider him someone who merits being lauded for his grasp and treatment of the issue, instead of a confiscation-in-emergencies-supporting pinhead. 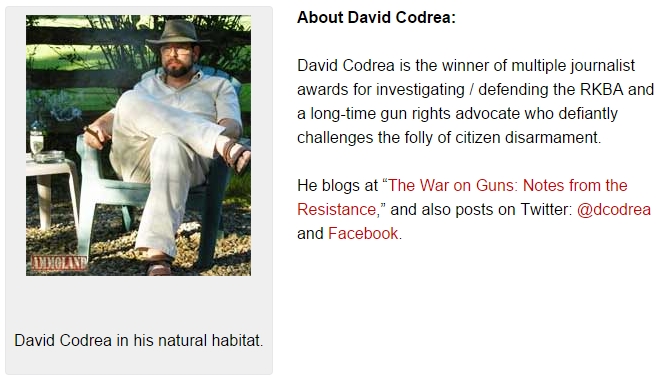 
Previous POLL: Should Christians Arm Themselves?