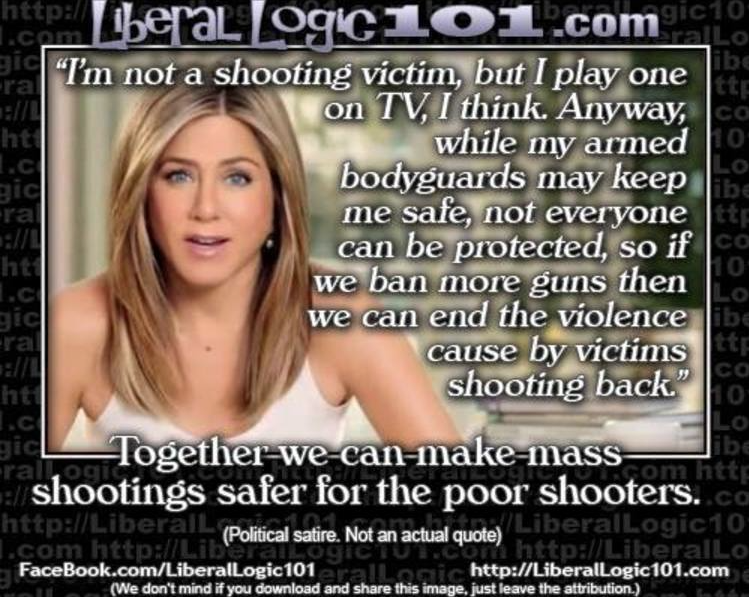 TheFederalistPapers found this, from BizPac Review:

For a PSA a’ la Hollywood, this seriously stupid ad coming from the gun-control crowd seems a little low-budget.

The ad features Amy Schumer, Sofia Vergara and Jennifer Aniston among a host of others, all calling for an end to gun violence — as if that will somehow deter radical Muslim extremists from pursuing jihad.

The Hollywood pinheads participate in the monotonous repetition of the same line: “We can end gun violence.”

Over and over again … which ensures the production doesn’t get bogged down in the messy details of how to make that happen. As Twitchy.com noted, the video “is basically nothing more than a hashtag campaign set to music.”

Which means the simplicity should be well received by the low-information crowd on the left.

There is one notable exception to the repetition … President Obama, the reluctant warrior, chimes in to say: “When we come together, Americans can do anything.”

Of course, not everyone in Hollywood is a pinhead. Actor Kurt Russell told an interviewer who tried to tie the San Bernardino shooting with America’s so-called “gun culture” that he was out of his mind, and that such thinking is “absolutely insane.”

There was also plenty of skepticism on social media, one user noting that some of the actors in the video contribute to the problem by portraying gun violence on the big screen.


Previous They Thought Stealing A Car Would Be A Joke. But Their Intended Victim Had Other Plans…