Nowadays, police officers are literally and figuratively under attack. Some police officers are being shot at, denied service because of their uniforms and generally treated with disrespect by a small but vocal percentage of the populatio. So when four police officers went to an Outback Steakhouse, they didn’t expect anything different as they were all going about their usual routine.

Manager Arline Wood and server Zoë Rao picked up the $67 bill for the police officers and included a note showing their appreciation of their service. The Slidell Police Department uploaded a photo of the receipt to its Facebook page, and the photo quickly went viral. 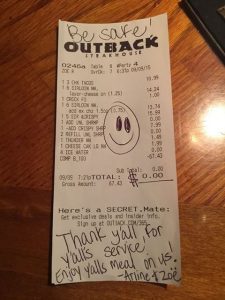 “I got a phone call early in the morning and I was like, ‘What are you talking about?’ People were calling me and then we saw it on Facebook, then it’s on this one and that one, and we didn’t do it for this publicity, because Lord knows I don’t like all this publicity,” Wood stated.


Both women expressed their appreciation for the officers when they were interviewed.

“They’re the sweetest guys, I enjoy waiting on them,” Rao said.

“They care about the community, they care about everybody, they’re just great guys, our whole police force is great and these guys at night, I went to Zoë and I said, let’s take care of it,” said Wood.

This is not meant to take away from the act of kindness, but due to ethics laws and Slidell PD policy. The officers left a very generous tip that covered the cost of the bill. It truly is a shame that we even have to put this disclaimer, but with the world we live in, we unfortunately have to.

Next HILARIOUS! Irish Farmer's Accent Is So THICK Even The Irish Can't Understand Him [VIDEO]